Social engagement is part of our sense of responsibility and firmly embedded in our corporate values.

Social engagement – or corporate citizenship – has always been an integral part of our sense of responsibility as a company. This is a tradition that dates back to our founder, Fritz Henkel, and is firmly embedded in our corporate values. Together with our employees, retirees, customers and consumers, Henkel and the Fritz Henkel Stiftung are able to support sustainable social projects around the world. They both support activities in the areas of social needs, education and science, fitness and health, arts and culture, and the environment.

Additional information can be found in our Sustainability Report.

In the UK, the Henkel Hemel Hempstead office supports local charity, DENS, which houses, supports and empowers vulnerable single homeless people, and others in crisis, to transform their lives. Colleagues volunteer, raise money and take part in events for this charity.

At our Winsford and St Neots sites, other local charities are supported.

In Ireland, teams have a wide variety of charitable causes that they support, from coaching junior Irish football teams to taking science out into the community and helping to build bikes for children. Below are just three examples of many showing how Henkel colleagues in the UK & Ireland give their time to community initiatives. 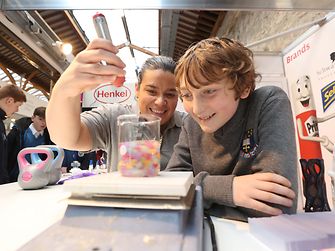 Nurturing the next wave of young scientists and technologists

In 2020, for the sixth year running, Henkel Ireland showcased its scientific skills by participating in the BT Young Scientist & Technology Exhibition, to engage young people from all over Ireland into the world of Science, Technology, Engineering and Maths.

BT Young Scientist aims to raise young people’s engagement in the critical subjects of science, technology, engineering and maths ‏(STEM). Each year, approximately 50,000 people attend this event, which is targeted at students aged 12-19, to showcase innovative science and technology projects.

Scientific finesse was in abundance for the sixth successive year as Henkel scientists wowed visitors with many inspirational and interactive experiments. The team are always happy to explain the science behind the experiments and talk about the company's tradition of technology and innovation leadership.

Matthew Holloway, R&D Director & Head of Rapid Systems, said: “This is Henkel’s opportunity to give something back to the community and help to get children interested and inspired by science. The team in Dublin loves promoting what we do and engaging with the Young Scientists via discussion and demonstrations.  This year we focused on the technologies developed on the Dublin site like Cyanoacrylates ‏(Superglues) and Anaerobics ‏(Threadlockers). We also showcased our activity in 3D printing.” 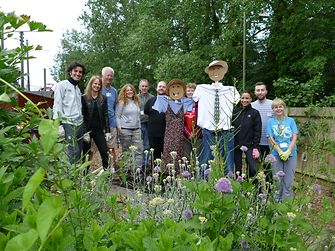 Green thumbs up for building a ‘Sensory Garden’

Volunteers from the Hemel Hempstead office joined forces with DENS, to help build a sensory garden and plant flowers in some newly installed raised flower beds at The Elms, a purpose built 44 bed temporary accommodation unit for single homeless people.

The team arrived eager to get to work with weeding, digging, planting flowers, making two scarecrows and a sensory garden. A mixture of hard work combined with fun and great teamwork led to a lovely afternoon and an unforgettable experience.

Chris Bloomfield, who is a volunteer himself and oversees the gardening, was impressed by the work carried out. He felt that “the team did a really outstanding job in the garden and it looks so much better for all their hard work”. New bikes for children in need

In summer 2018, Dublin R&D staff bought and assembled twelve children’s bicycles to donate them to Barnardos – a charity that cares for vulnerable children and young people.

Riding a bike is a joy and presents a wonderful bonding opportunity for children and their parents. Teaching your child to cycle is something most people take for granted is often a missed experience for families who can’t afford a bike.

Our Dublin R&D team used their DIY skills and a lot of passion for creativity, when they set their minds to building bikes. They added balloons, streamers and other decorations. The assembled bikes were double-checked by a professional and then donated to Barnardos.

Claire Rooney, Corporate Fundraising Executive at Barnardos, attended the event and very much appreciated the initiative, saying: “We receive lots of donations around Christmas but there are fewer contributions during the year. People forget that children also have birthdays.” 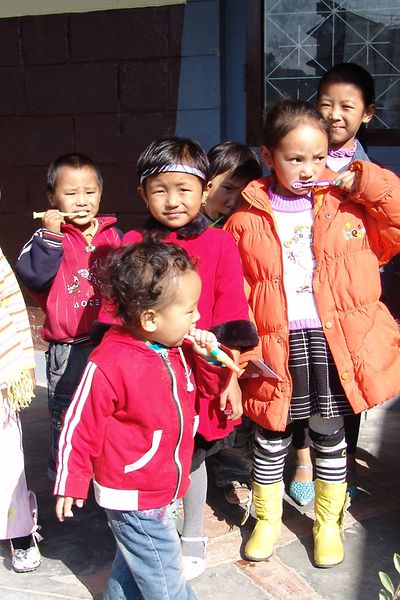 As part of our corporate engagement, we support our employees and retirees in their social volunteering activities in the communities where they operate, in an effort to support social initiatives and public institutions worldwide.

By establishing Corporate Volunteering ‏(MIT Initiative) in 1998, Henkel became one of the first German companies to include the voluntary social engagement of its employees and retirees as a significant element of its corporate social responsibility policy. By supporting their employees’ social engagement, Henkel sees important benefits. Better teamwork, greater motivation in their job and closer identification with their employer are just some of the positive results that volunteers report. Furthermore, the volunteers play a pivotal role as a link between Henkel and its social environment. As part of our corporate engagement, we enter into social partnerships in the communities where Henkel operates, in an effort to support social initiatives and public institutions.

Education is a basic prerequisite for both personal individual development and for society. It is for this reason that education initiatives are among the priorities of our corporate engagement. In cooperation with the Fritz Henkel Stiftung we are concerned with realizing ideas and programs that provide answers to societal problems and challenges. A particular focus of our work are young people - children, youths and young adults. In addition, we support sports clubs, hospitals, kindergartens, schools and universities, charity organizations, and cultural events. We do not support political parties.

Promoting equal opportunity: Henkel and the “Fritz Henkel Stiftung” are working with the “Teach First Deutschland” educational initiative to increase educational equality. One of the goals is to improve the education and job opportunities for young people regardless of their social background. “Teach First Deutschland” is one of the national partner organizations of the global “Teach For All” network. 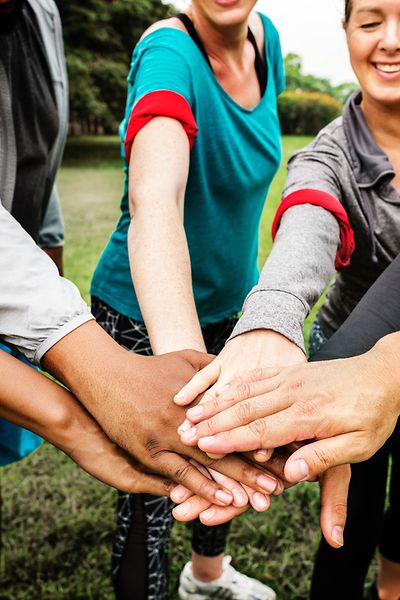 Our partners and our people are key to driving sustainability along our social partnership activities and in all areas of life. In co-operation with the Fritz Henkel Stiftung our brands support them with products and expertise. They make the difference through their commitment, skills and knowledge, both in their daily business actions and in our communities, where they contribute to sustainability. After natural disasters, Henkel responds quickly and unbureaucratically, providing aid through our foundation, the Fritz Henkel Stiftung, wherever it is needed in the world. In providing this assistance, we take care to ensure that 100 percent of all third-parties donations are passed on to the people affected. How to encourage children to take up science? Start them young! “There is so much in this world to discover. That’s why curiosity, having the courage to ask questions and having fun in finding out are what lie at the roots of our “Forscherwelt” initiative – igniting children’s interest in the sciences.”

(Dr. Simone Bagel-Trah, Chairwoman of the Supervisory Board and the Shareholders’ Committee of Henkel) 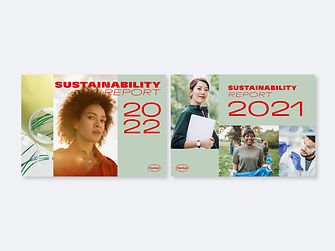 Archive of our annual Sustainability Reports, available from 1992 until today on henkel.com. 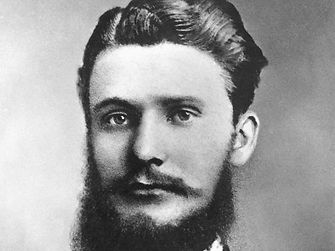 In January 2011, Henkel established the Fritz Henkel Stiftung. This foundation serves as the umbrella for our social engagement. It has close ties to the company and underscores Henkel’s long term commitment to social involvement that goes beyond its direct business interests.