A Third Say They Never Wash It; Seven Per Cent Admit They Don't Mind the Odour

To support the launch of its Purex® Odour Release detergent, Canada's #1 selling value laundry detergent conducted a fun survey to find out how often Canadians really do (or don't) wash their hockey equipment. The results are in - and they are surprising.

"Families across the country will be happy to hear of this new solution from Purex® for washing hockey and other washable sports gear," says Napaporn Slattery, Ph.D., Formulations Manager, Detergents at Henkel Corporation, the Germany-based company that creates and markets Purex® in North America. "Purex® Odour Release is the first branded value laundry detergent in Canada that boasts fragrance encapsulation with odour-elimination technology, which is ideal for hockey-obsessed Canadians because it helps fight tough odours."

To further support the launch, Henkel will roll out its mobile Purex Odour-Free Hockey Shop at 10 stops in eight Ontario cities in March and April 2018. The shop, which demonstrates to consumers that they can easily and effectively wash their hockey gear, is giving out free used hockey equipment washed in Purex® Odour Release. Visit PurexHockeyShop.ca for more details. 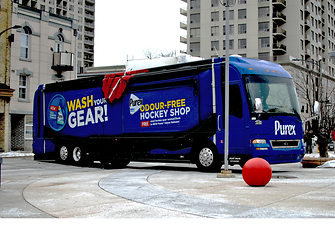 TIPS FOR CLEANING HOCKEY EQUIPMENT: The Purex® brand suggests following these useful tips when washing hockey equipment: check hockey equipment labels for instructions first; remove any pieces of removable plastic and attach any Velcro® straps to their partner before washing; don't over-fill your machine - divide gear into two or three loads; use a front-loading machine if possible, but if you have a top-loader, soak the gear for 15 minutes before washing to keep it from floating; don't use bleach; and place the washed equipment on a rack to air-dry, including gloves (to avoid cracking in the leather).

**The Purex® survey was conducted by Leger in February 2018, and included a representative sample of 1,575 English and French-speaking Canadians, 18 years of age or older. Using data from Statistics Canada, results were weighted according to gender, age, region, mother tongue, education and presence of minor children in the household in order to ensure a representative sample of the entire population under review. Leger is a member of ESOMAR (European Society for Opinion and Market Research), the global association of opinion polls and marketing research professionals. As such, Leger is committed to applying the international ICC/ESOMAR code of Market, Opinion and Social Research and Data Analytics.