The range of available options and measures for integrating refugees continues to be discussed intensively. This much is clear, however: integrating refugees within the job market is one of the central challenges involved in helping refugees settle into society. At the initiative of Kathrin Menges ‏(Henkel), Melanie Kreis ‏(Deutsche Post DHL Group) and Christian P. Illek ‏(Deutsche Telekom) – all board members for human resources – and of the Executive Board of the Federal Employment Agency ‏(BA), a joint pilot project has been developed for the purpose of helping refugees who lack qualifications and skills enter the job market.

A refugee's job opportunities can be hampered by the following: 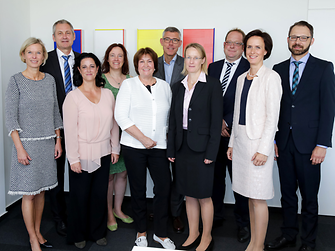 The board members of the German Federal Employment Agency, Deutsche Post DHL Group, Deutsche Telekom and Henkel, with the company sponsors, at the signing of the agreement on the "Internship PLUS direct entry" pilot project. The board members of the German Federal Employment Agency, Deutsche Post DHL Group, Deutsche Telekom and Henkel, with the company sponsors, at the signing of the agreement on the "Internship PLUS direct entry" pilot project.

"The number of refugees who are looking for jobs is growing," stated Raimund Becker, Member of the Executive Board of the Nuremberg-based Federal Employment Agency ‏(BA). "Refugees' biographies differ greatly, and thus it is often simply impossible to find jobs for refugees via the usual standard processes." Some 86 percent of all asylum seekers have no formal vocational qualification. For this large group, other integration strategies have to be found. "This is why we welcome the initiative, launched by Henkel, Deutsche Post DHL Group and Deutsche Telekom, for development of new pathways into the job market," Becker added.

The pilot project, which is to run initially for 2 1/2 years, calls for candidates to undergo an "activation and vocational integration" program ‏(MAG) during their first twelve weeks in the project. In such programs, participants acquire an initial set of vocationally relevant skills, and they are assessed to determine what vocationally relevant qualifications and skills, including language skills, they have that could serve as a basis for their further development.

Each MAG is then followed by an internship lasting twelve weeks. In such courses, participants acquire additional practical skills and knowledge in preparation for later jobs. Participants who successfully complete their internship then receive jobs limited to a term of 24 months. The program is designed to enable the participants to move into their jobs gradually, and to accept increasing levels of responsibility in the process. Throughout the entire period, participants also take supporting language and integration courses. And they are assisted by "company sponsors" ‏("Unternehmenspaten"). The sponsors provide support especially during participants' initial phases – as they familiarize themselves with their new working environments – and often for an additional period as well.

All three of the companies involved have already hired their first course participants. During the pilot phase, Henkel, Deutsche Post DHL Group and Deutsche Telekom intend to fill up to 100 jobs nationwide via the program. The companies also plan to search for qualified candidates for the qualification program, working in cooperation with the Federal Employment Agency ‏(BA).

"We all have a responsibility for helping those people who have fled to Germany to integrate into our society and our economy," said Kathrin Menges, Executive Vice President Human Resources at Henkel. "With this joint initiative, we want to create new prospects specifically for people who do not have recognized vocational qualifications, and help them to access the job market more easily."