On June 6, employees from Henkel Corporation spent the day at Hillsborough Middle School to teach over 500 eighth graders about sustainability. “Having Henkel’s employees present to our students was a great opportunity for the children to learn about ‘real world’ examples,” said Lisa Harwell, an eighth grade science teacher at the school. “The students listen to teachers all year long, but when they hear the messages from business people, it really helps them to make a connection. Not only was it great for them to hear from scientists but, also, hearing from employees in other roles, such as the Law Group, Safety and Corporate Communications, helps them understand how important science is in a variety of different roles.” 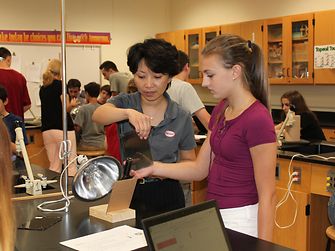 Henkel Product Development Scientist Yayun Liu sets up an experiment to demonstrate the ultraviolet and heat-blocking properties of solar films. Henkel Product Development Scientist Yayun Liu sets up an experiment to demonstrate the ultraviolet and heat-blocking properties of solar films.

Henkel is committed to leadership in sustainability and has set a company goal to create more value with a reduced environment footprint. Employees play a key role in inspiring others to make their own contributions to sustainability. As part of the company’s global outreach effort to teach students how to use resources responsibly, more than 6,200 Henkel employees have taught sustainability lessons to over 63,000 students in 43 countries.