Commitment to leadership in sustainability is Henkel’s ambition and one of its core corporate values. This engagement has once again been recognized by global sustainability experts. 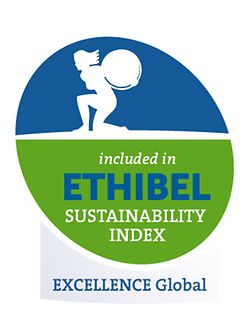 Henkel has been reconfirmed in two Ethibel Sustainability Indices ‏(ESI): the ESI Excellence Europe and the ESI Excellence Global. These indices universe is composed of companies included in the Russell Global Index, which display high performance in the field of Corporate Social Responsibility.

In addition, Henkel maintained its position in three Euronext Vigeo indices: World 120, Eurozone 120, and Europe 120. The indices include the 120 most advanced companies from the respective universe with regards to Environmental, Social and Governance performance. Both indices groups are based on the rating by Vigeo, a leading European rating agency in assessing the environmental, social and governance ‏(“ESG”) performance of companies, countries and public entities.‎ Vigeo measures the performance and risks with regards to six domains of corporate social responsibility: environment, human rights, human resources, community impact, market behaviour and corporate governance. Based on this, the composition of the indices is reviewed twice a year.