11,000 projects in more than 50 countries – that is the result of 16 years of volunteer work by the initiative “Make an Impact on Tomorrow” ‏(MIT). Through the MIT initiative, Henkel has supported the voluntary social engagement of both employees and retirees. Local sport events, building a house together, supporting homeless people or working on a reforestation project – the variety of social projects makes it hard to pick one for this article. With the help of a medical student ‏(right), a member of the Valle del Río Cimitarra community learns how to measure blood pressure. With the help of a medical student ‏(right), a member of the Valle del Río Cimitarra community learns how to measure blood pressure.

“I am deeply impressed by this engagement! And it makes me proud of our active and former employees to know that they are sharing their knowledge, their experience, their enthusiasm, and their energy to help other people”, says Kathrin Menges, Executive Vice President Human Resources of Henkel and Executive Board Member of the “Fritz Henkel Stiftung” foundation. 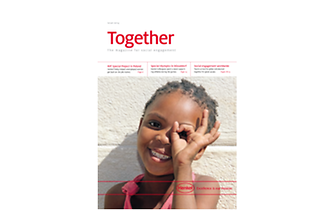 Henkel employee Greys Suarez from Columbia is one of these sedulous volunteers. In Colombia, the area along the river Río Cimitarra is home to about 30,000 small-scale farmers who have little access to health care. Henkel employee Greys Suarez has been able to put the 12,500 euros grant she won as a part of the 15th anniversary of MIT to good use for the farmers. Henkel and the Asociación Campesina del Valle del Río Cimitarra, which represents the farmers, purchased 17 medical supply kits and provided first-aid classes. Plans to get an ambulance boat up and running are currently in the works. “MIT projects help to change realities, not only for the people who receive the help but also for the ones who participate as leaders in the project,” Suarez says. “It helps us realize that it is possible to change the world.”

Have a look at other MIT projects in Henkel’s “Together – The magazine for social engagement”.