Initiative “year of responsibility” in Poland

25 years of Corporate Social Responsibility ‏(CSR) in Poland – an anniversary that the Thinktank center for dialogue and analysis took as reason to launch the initiative “year of responsibility”. As one of the country’s company leaders in CSR, Henkel Poland is one of the valued partners. 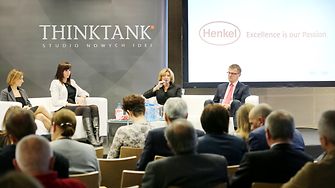 Henkel Poland took part in the conference in Warsaw and presented its policy of diversity. Henkel Poland took part in the conference in Warsaw and presented its policy of diversity.

The special initiative consists of a series of activities related to the topic of CSR which started with one first and important element: the report “Co-responsible business 1989-2015”. The publication sums up the last 25 years of corporate social responsibility practice in Poland and raises questions about its future prospects. The report also includes many examples of best CSR practices in the last quarter of a century. Under the title “revealing the potential of diversity”, Henkel was included as one of the best practice examples.

The report was presented for the first time at a conference held at the end of November and led to a discussion on interrelated topics such as issues of social responsibility and civil society, management by values, social trust, corporate responsibility and education.

Henkel Poland also took part in the conference in Warsaw and presented its successfully implemented policy of diversity. Spokeswoman for the company was Dorota Strosznajder, the board representative for social responsibility of Henkel Poland. In her speech, she informed the participants on diversity at Henkel and said that “for Henkel, a company that operates in more than 75 markets worldwide and employs people from 125 different nationalities, diversity is not only an everyday reality, it is also a necessity.”

She added: “Diversity is a prerequisite for success, since only through our multicultural and multiethnic employee-teams we are able to succeed on so many culturally and geographically different markets. However, the idea of diversity also offers effective solutions for the demographic challenges the company faces now and will have to face in the future, such as: increasing of the social and economic role of better educated women, aging of the societies, changes in the retirement age or different expectations and motivations of the youngest employee groups.”