Through Purex’s “Bright Washes, Bright Wishes” campaign, the Henkel brand was able to make the dreams of Jesus’ Make-A-Wish come true. Ten-year-old Jesus suffers from cystic fibrosis and dreams of traveling to Washington D.C. to expand on his passion for American history. 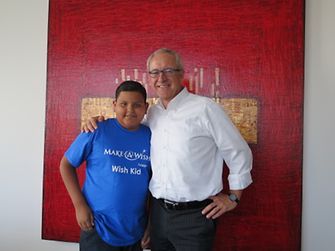 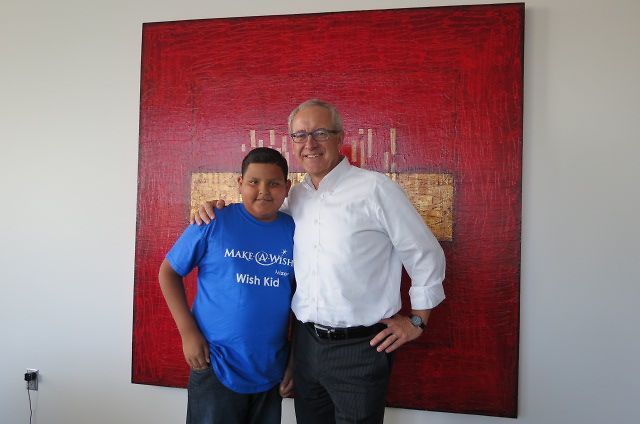 The Purex team hosted a Make-A-Wish sendoff party for Jesus at the Henkel Consumer Goods headquarters in Scottsdale, Arizona. Jesus was greeted with a warm welcome from Henkel employees and cheered on as he prepared for his trip. “It’s been my wish to go to Washington D.C. ever since my mom told me about it” said Jesus. Following his warm welcome, he received a tour of the facility and met with Henkel Consumer Goods president, Norbert Koll, and learned about being a president of a company and had the opportunity to make an ‘executive’ decision on the packaging for a new Renuzit Super Odor Killer® air freshener.

Also while on his tour, Jesus visited the R&D laundry lab where he worked on a laundry experiment. Jesus and his family then joined the Purex team members for a meet and greet, enjoyed ice cream and received parting gifts. While eating his banana split he sat next to a cut out of the Lincoln Monument, “I am most excited to go see the Lincoln Monument and the Library of Congress when I am in Washington D.C.,” said Jesus. His mother explains: “In high school, I took a school trip to Washington D.C., and I told him about it and ever since then he loves to learn about history”.

Purex’s “Bright Washes, Bright Wishes” campaign, launched earlier this year, has helped contribute the funds needed to grant the wish of Jesus as well as over 30 other Make-A-Wish Kids who are living with life threatening illnesses.

Make-A-Wish is one of the leading children’s charities that has granted around 226,000 wishes since 1980, and over 14,000 just last year. Make-A-Wish national offices are based in Phoenix, AZ with around 25,000 volunteers and generous contributions which helps grants the wish for a child that is diagnosed with a life threatening medical condition in the United States. On average a wish is granted about every 38 minutes.