Henkel innovations ranging from adhesives, sealants and threadlockers, through to retaining compounds, gasketing products and cleaners, have helped a number of teams competing in the UK Formula Student 2017 competition achieve impressive results. Chief among them was the University of Hertfordshire (UH Racing), which won four awards at the UK event, where it placed 16th overall out of 75 universities.

Now in its 20th year of competing, UH Racing never rests in its ambition to create ever-more competitive cars. This year, the team introduced a turbo-charger, which increased power output by 70%. The team is using Henkel’s LOCTITE® products “more than ever” in its 2017 car.

The first event of the 2017 calendar took place in the UK, at Silverstone. For those unfamiliar with Formula Student, these are much more than just a race. Each team first competes in three areas: design, cost and business presentation. This is followed by two days that focus on disciplines such as acceleration, skid pan testing, autocross and endurance ‏(including fuel efficiency).

As a result of its dedicated endeavours, UH Racing won four awards at Silverstone: Most Effective Communications Strategy; The Art Performance Award from sponsor Jaguar Land Rover; Class 1 Design; and Endurance Event Fastest Lap. Overall, the team placed 16th out of 75. Without a battery fire during the acceleration event, a much higher finish would have been achieved.

“I’m proud of the team’s performance this year; they put in a phenomenal amount of work in the build-up and their hard work was rewarded with four awards,” says Dr Howard Ash, Programme Tutor in the School of Engineering and Technology, at the University of Hertfordshire. “Bad luck befell the team during the dynamic events, but the way they pulled together to get back on track was terrific."

Scott Fowler, Powertrain Engineer on the UH Racing team who is currently in his fourth year of study within the MEng Automotive Engineering with Motorsport programme, adds: “It was not a bad ending to our 20th Formula Student competition. Considering everything, we achieved a very creditable finish. Many thanks again to Henkel for supporting the team.”

With the Formula One British Grand Prix taking place just a few days before, UH Racing was invited to represent Formula Student at this prestigious event. In a first for the competition, UH Racing’s car appeared on the circuit at Silverstone after Saturday’s qualifying as part of a special demonstration. The team took part in an acceleration trial against a Caterham 7 and a Formula Ford to showcase its engineering prowess in front of fascinated spectators.

UH Racing has subsequently competed at two further Formula Student 2017 events, in Germany ‏(Hockenheim) and the Czech Republic ‏(Autodrom Most). The team was well placed in both events, providing plenty of promise and expectation for next year’s competition.

Products such as LOCTITE® 9466 industrial grade epoxy adhesive are used for UH Racing’s carbon fibre requirements, while LOCTITE® H3101 methacrylate adhesive is applied to the close-out panels. Furthermore, LOCTITE® SI 5990 gasket sealant is deployed on the engine casing and sump, while the team also uses extensive amounts of LOCTITE® threadlocking adhesive and retaining compound, as well as LOCTITE® cleaning products. 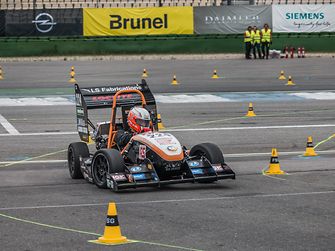