Henkel’s Sustainability Report details the environmental and social advancements made by the company in 2014. It highlights the active involvement of employees worldwide and the company’s progress toward its sustainability goal for 2030.

“Henkel’s clear Sustainability Strategy has proven highly effective, enabling us to reach four out of five interim targets one year ahead of schedule,” said Kathrin Menges, Executive Vice President Human Resources and Chair of Henkel’s Sustainability Council. “Our employees play a key role in achieving these successes and we will continue to rely on their commitment and expertise to drive further progress.”
The strategy presented in 2012 has the long-term goal of achieving more with less and increasing resource efficiency by a factor of 3 by 2030. Henkel aimed to improve the relationship between the value it creates and its environmental footprint by 30 percent for the five years from 2011 to 2015.

By the end of 2014, Henkel had achieved significant progress, with improvements of 20 percent in energy efficiency, 19 percent in water use, 18 percent in waste volume ‏(22 percent excluding construction and demolition waste) and 25 percent in occupational safety. The company aims to improve its performance again in 2015 and is working on defining new interim targets for 2020. Henkel views leadership in sustainability not only as a responsibility, but also an opportunity to continuously strengthen its competitiveness. Three strategic principles are key to the implementation of the Sustainability Strategy: products, partners, and people. The company focuses on developing products that offer more value and better performance and have a smaller environmental footprint. Together with its partners, Henkel aims to continuously improve its products across the entire value chain. Moreover, active employee involvement is fundamental to reaching Henkel’s ambitious goal for 2030.

One important tool that was expanded in 2014 is Henkel’s “Sustainability Ambassadors” program. The program gives employees a clear understanding of sustainability and enables them to convey the importance of sustainability to their co-workers, suppliers, customers, consumers and school children. Since the launch of the program in July 2012, more than 3,800 employees in 70 countries have become ambassadors and have reached out to around 36,000 school children in 37 countries. 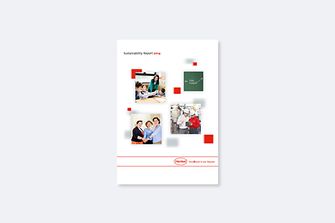 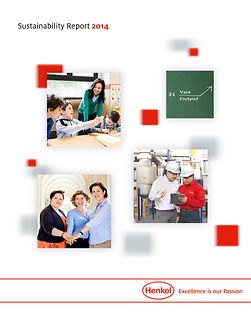