Henkel named one of the World’s Most Ethical Companies

For the seventh consecutive year, Henkel receives RobecoSAM’s Gold Class award and is named one of the World’s Most Ethical Companies by the Ethisphere Institute. The accolades recognize and confirm Henkel’s continued leadership and consistent commitment to sustainability.

Henkel received the Gold Class award in the Sustainability Yearbook 2014, which lists the world’s most sustainable companies in each industry as determined by RobecoSAM’s annual Corporate Sustainability Assessment. Henkel was the only company in the Household Products category to receive the Gold Class designation, after being named the Household Products Sector Leader for the seventh consecutive time this past fall and remaining the only company in its sector to feature in both the Dow Jones Sustainability Index World and Europe indices.

The Sustainability Yearbook is published by sustainability investment specialist RobecoSAM in collaboration with KPMG. Over 3,000 of the world’s largest companies are invited to participate in RobecoSAM’s Corporate Sustainability Assessment ‏(CSA) every year. Participation in the RobecoSAM CSA has continuously risen – with a record number of companies taking part in this year’s assessment. According to KPMG and RobecoSAM, this trend indicates that sustainability is increasingly rising to the top of corporate agendas and becoming ever more mainstream.

Also for the seventh consecutive year, Henkel was named one of “World’s Most Ethical Companies” by the Ethisphere Institute, an independent organization promoting best practices in corporate ethics and governance. The award recognizes companies that continue to raise the bar on ethical leadership and corporate behavior. Henkel is one of only nine companies in the consumer products manufacturing industry and the only German company honored this year.

These awards recognize Henkel’s continued efforts to achieve more with less, the concept at the center of Henkel’s sustainability strategy. “The global sustainability challenges that we face require companies to examine long-term risks and opportunities,” says Kathrin Menges, Executive Vice President Human Resources and Chair of Henkel’s Sustainability Council. “In this context, the Dow Jones Sustainability Index, the World’s Most Ethical Companies and other global ratings provide important feedback for us, helping ensure that we are on the right track when it comes to creating more value and reducing our environmental footprint. We are proud to be recognized by these organizations for our consistent, long-term approach to sustainability.”

By 2030, Henkel aims to triple the value it creates for the footprint made by its operations, products and services. Over the past eleven years, the company has cut water and energy consumption by 51 percent and 44 percent per ton of production, respectively, and reduced waste by 47 percent per ton of production. Over the same period, the number of work accidents dropped by 90 percent.

As sustainability leaders, we aim to pioneer new solutions for sustainable development while continuing to shape our business responsibly and increase our economic success. This ambition encompasses all of our company’s activities – along the entire value chain. 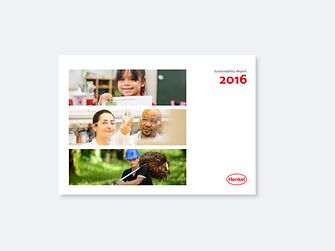